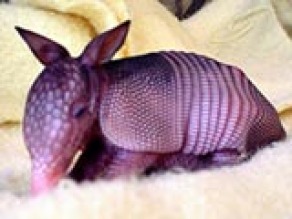 Baby Armadillo
Reproduction has only been studied closely in the Dasypus novemcinctus. The nine-banded armadillo is a successful reproducer. The nine-banded armadillo mates as early as July and as late as December and gives birth during the months oMarch and April, when not stressed or when climate conditions are at there best. The nine-banded armadillo with a few close cousins are the only known creatures to give birth to same gender quadruplets (never more or less) from the same embryo. Even though the nine-banded armadillo produces one ovum per year, the development of polyembryony contributes to their massive reproduction rate. Implantation of the fertilized egg may be delayed for up to fourteen weeks after conception  and the gestation period is known to be 150 days or longer.The delay of the of the implantation of the embryo in the uterine wall is thought to be caused by stress.
Armadillos are born with their eyes open and begin to move around within a few hours. The young armadillos tend to stay with their mother during the spring and summer months, and then move on their own by the following year. The armadillo’s life span can range from four to seven years, but it has been known to survive up to ten in captivity.