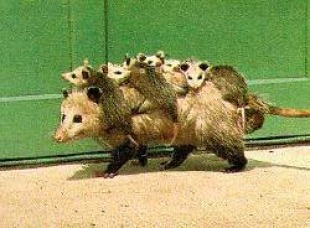 'Opossum.' KaweahOaks.com. Web. 27 May 2010.
Opossums are considered promiscuous, or polygynandrous.  Male opossums are non-territorial.  While females defend areas and males seek mates by roaming around.   Licking and scratching of the cervical scent gland and vocalization help males find females.  The smell that female opossums release through their sweat glands attract males.

The opossum breeding season is during the wet season when fruit is most abundant.

Opossums undergo a brief gestation period and give birth to tiny offspring that crawl into the mother's pouch, where they attach to a nipple and feed for about 100 days.  After the  100 days, the baby opossum is still unable to live by itself, so the mother carries it on her back.