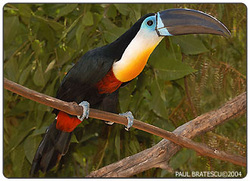 The Channel Billed Toucan is a bird that can be seen or heard on our campus very often, since they live on the treetops that surround the buildings where classes take place.
This bird usually has an orange throat and chest, a broad red band below the chest, red uppertail-coverts, a yellowish base to the bill, and red skin around the pale blue eye.
A medium-large Toucan is generally 45-55 cm (18-22 in) long. Males are larger and longer-billed than females. The bills are generally about 9-14 cm (3½-5½ in) long.

•The Channel-billed Toucan is found in forests and woodlands.

•The toucan prefers to live in humid regions, but locally extends into drier regions and areas close to rivers.

•It is found mainly in lowlands, but at an altitude of about 1700m.

•Usually found intropical South America, as far south as southern Brazil and central Bolivia, the island of Trinidad, and banks of Amazon.