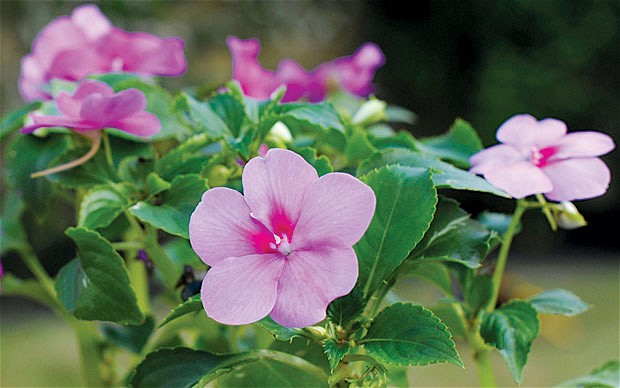 Telegraph ©
Effect of abiotic factors:
The cold temperature (under 13 degrees Celsius) destroys the plant; direct sunshine can also burn the chloroplasts and consequently kill the Impatiens. It requires humidity to prosper, and water; event though large quantities are not needed since it has “straw” stems and leafs that can store water--this explains its prevalence in shade and humid areas. 3


Dependence on light:
As all other plants, Impatiens is also dependent on light; however, it contains some special characteristics that allow it to absorb more light in shade regions. Those include the large surface area of leafs, the low height of the plant, the leaf’s divergent angle, the proximity and angles of the leafs, and the oval shape of the leaf blade. 2


Medicinal Use:
The toxins that alienate other species from the eating the Impatiens can to develop medicinal drugs. It is boiled and flavored, prepared just like the arrowroot, and treats irritations gastro-intestinal canals, and can be used to make a jelly. 4


Cultivation:
It is the most invasive plants in African forests, South America and the United States; however, its abundance has led several states to limit the cultivation of the plant given that it deprives other organisms from absorbing nutrients from the soil.
The plant can be cultivated in basically any type of soil, and is easily propagated, the blowers bloom throughout the entire year, and it used as ornaments in indoor environments quite frequently. 4

Pests:
The fungus-like organism Plasmopara obducens causes a disease called downy mildew that makes the leaf become yellow, inhibits growth and development, stunted height and leaf size,, white spores, and eventual flower drop. Because there is a current epidemic of this pathogen, farmers are attempting to control the pathogen by applying fungicides on young plants, and some farmers are now replacing impatiens for other plants such as Brazilian Red Hots. Beetles and slugs take advantage of the humid and warm leafs of the impatiens walleriana for shelter and development. 4

Impatiens in North American has the ability to fertilize before  blossoming--this is called ciestogamy. 6